July 7, 2021 by Michael Webster
From Our Expertsstreamingelectronicstrends

Summer is officially here! That means school’s out, the days are lasting longer, and the temperatures are quickly starting to rise. And while some days might be too hot to handle outside, your favorite streaming services are making sure there’s no lack of entertainment for the summer days you want to stay cool inside on the couch watching some great TV.

There’s a ton of new content coming out this July, so if you’re looking for an excuse to beat the heat, munch on some popcorn (maybe some ice cream, too), and kick your feet up inside – we’ve got you. Here’s our list of the top 5 shows to stream this July:

Our favorite Monsters are back! Mike Wazowski (Billy Crystal) and Sulley (John Goodman) return in the latest spinoff of Pixar’s beloved “Monsters Inc.” The new animated series will take place the day after the original film, when the Monsters Incorporated power plant started harvesting the laughter of children to fuel the city of Monstropolis.

Expect to see some familiar faces, and some new ones, in this fun new animated series that will be sure to fill your home with laughs. Start streaming new episodes every Wednesday, starting July 7 on Disney+.

Almost 10 years have passed since the original “Gossip Girl” series concluded, but HBO Max is now set to introduce a new generation of rich New York teens for the streaming service’s 10-episode reboot. The series is executive-produced by Joshua Safran and Stephanie Savage who created and ran the original series, as they look to continue this next leg of the show for both the diehards and newer fans of the original.

You can stream all previous seasons now and catch the new, comeback season on HBO Max, premiering on July 8.

If you’ve played video games over the last 20 years, you know exactly what “Resident Evil” is. Now, the acclaimed video game series is getting its first animated television adaptation on Netflix. “Infinite Darkness” will center on Leon S. Kennedy (Nick Apostolides) and Claire Redfield (Stephanie Panisello), two of the franchise’s most popular characters, as they team up following a zombie attack on the White House.

Even if you’re not a fan of the video game, this series delivers a healthy punch of action, horror, and thrill that will be sure to have you on the edge of your couch. You can start streaming the entire thrilling series on Netflix, starting July 8.

If horror-themed TV shows are your thing, then you’ve definitely watched at least one season of “American Horror Story” (AHS.) The show's creator Ryan Murphy, is now set to release a spin-off to the ever popular and frightening program, titled simply: “American Horror Stories.”

Murphy described the new series as a weekly anthology series that will center on a different plot every week, as opposed to the season-long arc of “AHS.” Most details about the series (including a trailer) are under wraps, but you won’t have to wait much longer to experience it for yourself! You can stream all previous seasons of “AHS” now, and catch the new spin-off series on FX on Hulu, beginning July 15.

The breakout Apple TV+ comedy series is returning to the streaming service soon for its second season. Ted Lasso stars Jason Sudeikis as a small-time college football coach from Kansas, who’s hired to coach the professional soccer team AFC Richmond in England − despite having no experience coaching soccer.

The series has received raving reviews for Lasso's unrelenting positivity, winning multiple Critics Choice Awards and several other awards, including Sudeikis taking home the Golden Globe for Best Actor in a Comedy Series. You can catch up on season one now and stream the all-new season on Apple TV+, starting July 23. 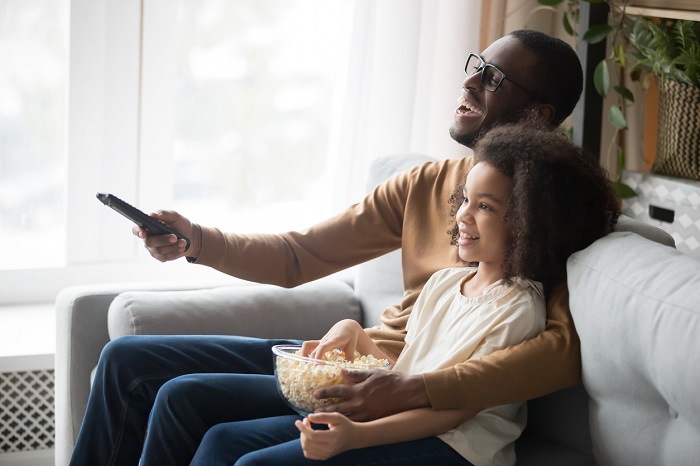 Whether you’re a fan of nostalgic reunions, wacky sports coaches, or a scary story, July’s new streaming offerings will be sure to keep you entertained for the days it’s too brutal to bare outside. With the weather getting warmer and warmer, there’s never been a better time to chill indoors and binge some new content.

And if you think your current streaming setup could use an upgrade for the grueling summer months, we offer a If you have questions about televisions or any other electronic need,

or shop in-store today, and we’ll be happy to make sure you’re ready to stream, kick your feet up, and relax all summer long!