New Tech That Can Help You Throw the Best St. Patrick's Party Ever

Top o’ the morning to you! We’re getting closer and closer to March 17th, and for those of you not in the know, that means that one of the best holidays of the year – St. Patrick’s Day – is right around the corner!

There are a lot of different ways to celebrate the holiday but given that it falls on a weekend this year, the possibilities really open up. And with some new electronics under your kilted belt, you’ll be able to throw a party that people will be talking about until next March!

If you ask us, one of the best ways to kick off any party is with a power hour – and every power hour is better with some awesome graphics to go along with it instead of relying on just the music. Grab 60 of your favorite songs and mix them together for one hour of Irish-tinged shenanigans. Ireland also has a rich musical history, so it works quite well thematically.

Of course, given this is going to be the center of entertainment for your party, you don’t want to be displaying the power hour on some lackluster -- and dare we say it, unlucky -- screen. Get yourself a brand new 4K screen and a new sound bar, and your power hour will look and sound better than ever.

Don’t worry either if the TV you want to get is beyond your powers to set up. Stop in today and we’ll be glad to help you not only pick out a TV, but we’ll also deliver and get it all set up for you. It’s just part of our duty to our local clientele!

There aren’t many parties we can think of that only took place in one room. If you want to throw a less-than-stellar St. Patrick’s Day party, then by all means limit the excitement and revelry to the living room. But if you want to throw a great St. Patrick’s Day party, then you need to make sure that at the very least your music isn’t just stuck in one room with one speaker. In fact, you probably want to make sure that you have music in at least four rooms. Even better, what if your speakers had Amazon Alexa voice control, so your guests could request their favorite songs?

It’s possible. With a Sonos Four Room Set, you can bring your playlists, music, podcasts, and everything else audio related to four different rooms in your house. And while they don’t come in festive green colors, you can get the speakers in either white or black, so at least those options should give you enough to match your usual decor. 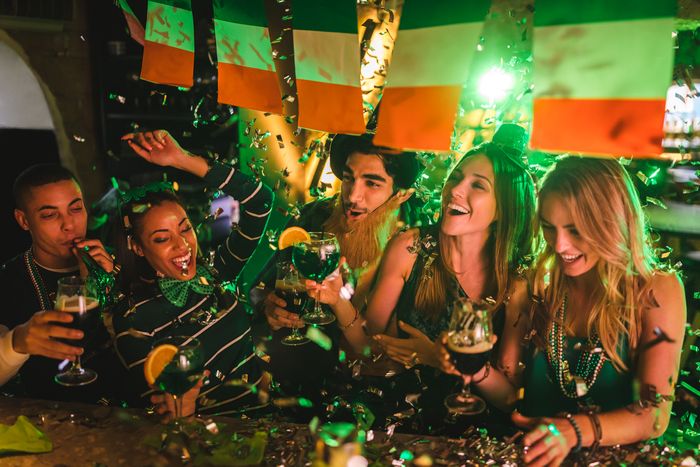 Looking to really take your St. Patrick’s party to the next level? Don’t be bound by the limitations of your four walls – it’s time to take your party outside.

How will you keep people occupied while outside, though? Your TV can’t go out there, which means you might have to cancel those already awesome-sounding power hour plans you had.

Well, not so fast! With a Sony portable short throw projector, you can turn any outdoor wall into a TV screen. Watch shows, movies, project your power hour, play video games – anything you want to do, you’ll be able to do anywhere you want to do it, with a projected screen size of up to 80”! Now THAT’S how you throw a St. Patrick’s Day party in 2019.

Of course, we know that your household electronics needs extend far beyond the 17th of March every year. The good news is that we are right here in your local community year-round! Stop in today and check out our wide selection of electronics – you don’t even have to follow a rainbow to find our amazing deals!

Are Streaming Services Cheaper Than Cable?
Will Disney+ Be On Smart TVs? Your Questions to Streaming in 2020 Answered
6 Must-Have Electronics for Back-to-School
10 Shows you Need to See this Summer
Why It's Time to Upgrade Your Speakers